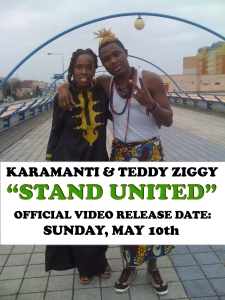 In approximately two and half weeks Karamanti will be releasing the official video for the single “Stand United” with Nigerian Dancehall artist Teddy Ziggy.

The video was shot in Prague City, Czech Republic in November last year while Karamanti was on her 2014 European Tour.

The release of this video is very timely as it calls on Africans to unite regardless of color, tribal affiliation or class: With the recent rise in violence in South Africa, Teddy Ziggy and Karamanti says “we must be mindful of our actions so as not to repeat his-tory”.